Co-Laborers with God
I have recently been thinking and praying about our move to Bolivia these past weeks.  It has become more and more of a scarier idea then it has in the past.  I think more so that I will miss my family and this move is way beyond any other move that Chris and I have ever made (and we have moved 11 times in our marriage of 9 years). To combat these emotions and the fear, I talk a lot with God.  I do have alot of down time nursing little Cara after all and due to some insomnia at night, I have taken to praying and just laying out my fears before God.  On recommendation by Jodi Knott I have begun to read the book "Daring to ask for more" by Melody Mason again.  I read this book about 3-4 months back and have decided to re-read it as I am in need of more encouragement these days.  I would recommend this book to everyone as it makes it clear (as does the bible) that prayer is our only answer in these last days, both reaching people and standing firm in our beliefs.  In the first chapter I found my inspiration:

We are to be co-laborers with Him.  We are to be a light to the Gentiles, to open the eyes of the blind, and to set free those locked in darkness. (Isaiah 42:5-7)

If God promises to use me like this, then he offers it to me as well.  This gave me peace.  The very next paragraph opened my eyes even more:

Nothing honors God quite as much as when we have faith for the completion of His work, faith that sees far beyond our own ability and grasps His infinite resources for we are told that nothing is too hard for Him (Jeremiah 32:17).  Inspiration assures us, "the power of God's command is limitless."

It is a good feeling to know that Chris and I are doing the work we are called to.  It is also great to know that God is just using us and He is actually doing the work.  This move is still very terrifying to say the least but in the end, I would rather be co-laborers with Christ then walking the wrong path.

Africa:
So as of August 22, Chris has been in Africa working on two airplanes.  He has had quite a few adventures this time.  here is just one story that he shared with me and on facebook.  And yes while it initially freaks me out to know that Chris may not have escaped, it builds my faith just a bit more to know that God is with him, protecting him.

The Angry Elephant: (written by Chris)
I went for a run this morning. About half a mile out I saw a group of elephants on the edge of a clearing. One of them looked at me and turned away. They were probably 200 yards away from the road. I thought that was pretty cool that I would get to see elephants that close. Little did I know I was going to get a whole lot closer to one. I kept running past the clearing and around a corner the road ran through a thicker treed area. I was just starting into it when I heard some snorting and rustling in the trees ahead. No sooner had I stopped than out comes a bull elephant onto the road maybe 100 yards ahead. He was coming right at me, and looking rather agitated. I turned around and started walking away. Looked back over my shoulder and he was still coming, ears flapping aggressively. Then I started running and thinking quickly what to do next. He trumpeted and started moving faster. I've never been so scared in my life, but I didn't have time to process that, I was too busy trying to figure out what to do. There was a pretty heavy group of bushes to my left. I ran around the back side and dove into the middle. Ended up on the only place left to go, my knees. As i prayed the elephant came right up to the bushes and stood there looking my way for a little while. I don't think he saw me or he could have ripped up the bushes in 2 seconds. I was able to look right at one of his eyes through the leaves. He was less than 10 feet away. He stood there and snorted for a few minutes then kept going down the road about 30 feet, turned back toward me and stood there slowly flapping his ears, snorting and tamping his feet once in awhile. He was past the next bush, so I could move a bit without fear of him seeing me. I could just see a tiny bit of gray through the next bush. Then we waited. My heart calmed down to almost normal, and I kept praying. Praying that the elephant would calm down, that someone would come driving down the road, that the mosquitoes swarming wouldn't give me malaria, that I would have patience to wait it out. It was probably an hour before he finally started moving into the grass off the side of the road. My side of the road. I prayed he wasn't coming my way. I couldn't see him through the bushes and tree between us. Slowly he moved away. Maybe another 30 minutes before he was deep enough in that I thought I could at least move out to the road to get away from the mosquitoes and biting flies. I couldn't see him anymore and barley heard him, so I started walking slowly back. I caught a glimpse of his shoulders over the bushes, but he was deep enough in the thicket that he wouldn't be able to see me. I was pretty jumpy all the way back to camp. A grasshopper jumping into the bushes nearly made me jump out of my shoes. As I got within sight of the huts on the north side of camp, a jeep came out with a couple patrol guards. Had I waited 10 more minutes they would have driven passed me in my hiding spot. God was taking care of me but I didn't quite have the patience to wait for Him. Well, he protected me anyway.I haven't processed it yet. I'm still shaking a bit. I really thought I might be killed. Thank God the elephant lost track of me in the bush and finally walked away.I've had enough excitement for awhile. I think I'll stick around camp from now on. At least I know God is watching out for me. But I don't think I'll test Him any more than I have to.

Side note: in the evening I flew three loads of guards out to another part of the park for the start of their foot patrol. On the way, I saw the same elephants playing in the river. They looked so childish from the air. I couldn't help but think "one of those guys could have killed me this morning."

The safer side of life: Africa
Since being in Africa, Chris has gotten to fly a bunch, flying patrol men around the park, dropping off supplies to other patrol men.  He has seen some wild life beyond the Elephants, such as wort hogs, hyenas and giraffes.  but lets not skip the little animals: scorpions, lizards spiders etc. And many birds.  It is the wet season there right now so he hasn't been able to travel into the park as much except for flying and flying and bird watching do not go together very well so not as many birds were viewed this time around.

He has posted some of his photos on facebook of the animals and the planes.  He is getting first hand experience in landing on unmowed grass strips and such so that is exciting.  He will be returning home this coming Friday.  We are all glad for that. 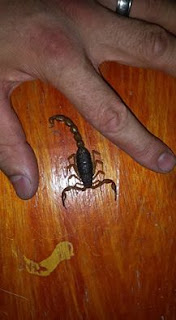 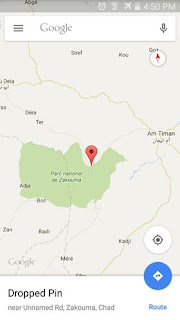 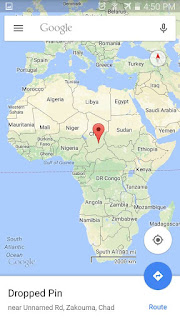 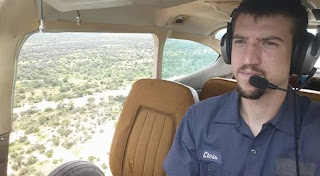 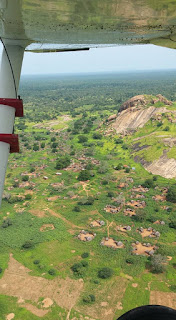 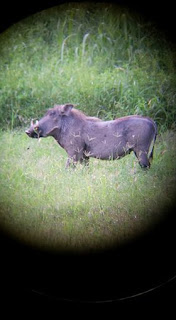 Above Left Village of Iber, Above Right a photo of a wort hog through binoculars
Below the Herd of Elephants 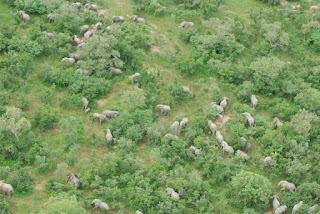 In America: Crystal and the Kidlets Travel 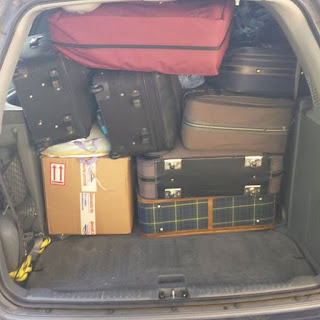 I on the other hand have just been packing and packing and packing.  Yes on September 7th my mother, Debi, and I took off for Dassel Minnesota.  We will be staying with Chris's parents until we head south to GA and onto Bolivia.  We loaded the car up and drove 3 long days to get here.  all the stuff that I needed to bring, my dad said I wouldn't be able to fit in the car.  Well if anyone knows me well, I am stubborn and yes, I showed him.  I brought everything but two boxes of books (which were a lets bring them if I have room).  We really had no problems getting out here and arrived here Wednesday in the evening.  The kids traveled well and we even got to stop off at Theodore Roosevelt National Park for a gander at the view.  One more National Park visited and checked off my list.  Too bad we couldn't go hiking.  It was beautiful.
(picture above: I had already unpacked several suitcases and other stuff, and the stroller and Corey's bike were on top of the van) 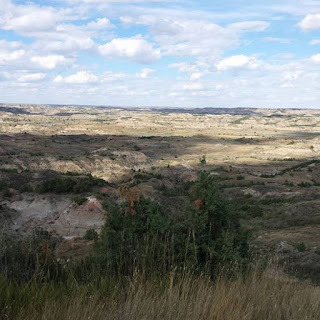 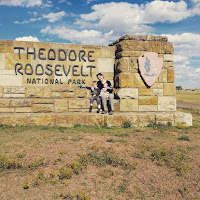 Theodore Roosevelt National Park (the picture doesn't do it justice
Minnesota:
We have been here for a week now and Corey is just loving hanging out with Grandma and Grandpa Eno.  Today they are picking grapes and making jelly and if we have time, later we will be making play dough and finger paints.  Such a fun age. 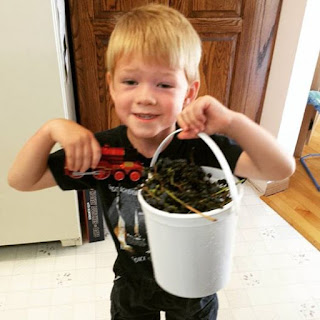 Only a Portion of what was picked. 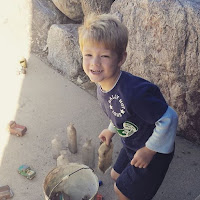 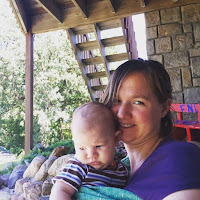 Watching Corey Play outside on a warm day.

Travel Plans and Needed Items:
We have more travels coming up soon.  I have been pricing airline tickets and have found some for a decent price.  We are still waiting for Cara's passport but hopefully it will arrive soon.  I hope to purchase tickets in the very near future.  It appears that our fly out date will most likely be October 18th.

We still need to purchase some things before we leave and we still need money for the plane tickets and our visas along with being able to survive down there.  here is the brake down of what we have so far.  If God moves you to contribute to his work by getting us down there, please visit our donate page to find out how you can make a Tax deductible donation.

Time is drawing near for us to leave.  thank you to those who are praying for us and supporting us in all the different ways.  We feel very blessed.
Posted by Chris and Crystal Eno at 10:00 AM